Car Safety: Are You Getting What You Pay For? 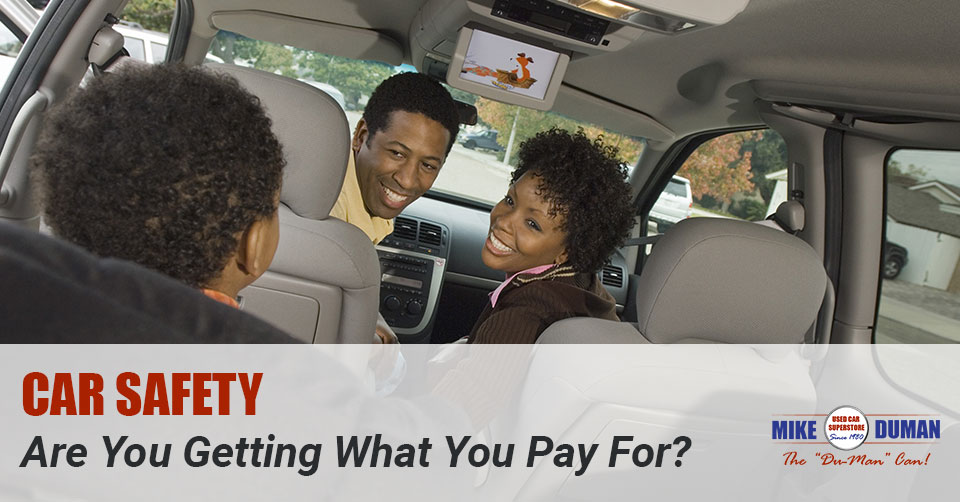 Every year we see new articles touting the “Safest Car of the Year.” Car safety has changed a great deal throughout the years, from the implementation of the lap-type seat belts, moving up to shoulder type seat belts, then on through airbags, crumple zones, and now we are coming to an era of autonomous cars. Just like all improvements in technology, these added safety benefits come at a cost. How much safer are drivers and passengers with these added features? Do the benefits always outweigh the costs? Let’s take a look at a few of the more common improvements in automotive safety in the last decade.

The most obvious safety feature of any car is the seat belt. Some may remember the early versions of the seat belt where only the lap belt was implemented. This lower half only seat belt was introduced throughout different car makers in the 1950’s, and in 1968 the first standard federal law was enacted, stating that all cars sold in the country must be equipped with seat belts. Since then, every state in the union has mandated at least some legislation that requires the use of seat belts. The shoulder harness was added in the late 60’s to create the 3-point system we use today. Seat belts didn’t stop improving 50 years ago. The seat belt in today’s cars are different from even those made at the turn of the century, as seat belt inflation devices installed in GM cars from 2011, and improved pretension devices have created a safer environment.

Chances are, the car you are driving now has airbags on both driver and passenger sides. Early airbag systems deployed from the steering wheel and protected just the driver. Later models added a forward airbag for the front passenger seat as well. On September 1, 1998, all cars sold in the United States were required to have airbags on both sides. The latest improvements include knee airbags, side airbags, side curtain airbags, and front center airbags, which combined have greatly reduced injuries in auto accidents. The National Highway Traffic Safety Administration estimates that 18,319 people are alive today because of their airbags.

• Got Extra Cash from Your Tax Refund? Get Smart Ideas About Using It on Your Automobile.

One of the newer improvements in car safety is Autonomous, or Adaptive Cruise Control (ACC). ACC was introduced in the mid-2000’s and has become commonplace in most major car manufacturers, including Volkswagen, Chrysler, Jeep, GM, and Ford. Autonomous cruise control automatically adjusts your car to maintain a safe distance from cars ahead, using onboard sensor information from laser and radar-guided systems. According to AAA, ACC systems may help prevent 13,000 crashes per year.

Changes in the Steel

Possibly the least obvious safety feature is the base steel that cars are made from today. Chuck Thomas, the Chief Engineer of Honda’s Research and Development team in America says, "We probably had 500 megapascals of tensile strength in the early 2000s. Now hot-pressed or hot-stamped steel is around 1,500 megapascals." Advances in the strength of the metal, combined with better engineering and crumple zones have greatly reduced the crash energy that enters the passenger cabin.

Every year auto manufacturers improve the safety of the cars they produce through many means. Whether by increased use of technology, or integrating better components to old systems, newer cars are safer. This brings us back to the original question: Are these extra safety features worth the money? Some would argue that improved safety features lower the insurance premiums, which is certainly a fact. The most important factor to consider may well be looking in the passenger seat. How much would you spend to keep your child, your spouse, your friend, or your family from getting hurt? How much should you spend on safety? How much is your life worth?

At Mike Duman Auto Sales we can help you find the right car for you and your family with the safety features you need. We serve all of Hampton Roads and beyond, so come on down to our Suffolk or Franklin location today, give us a call at 800-211-0420 or send us an email. Remember, when others can't, the Du-Man Can!

For many Americans, tax time means extra money in their pocket. Do you need a new ride or some sorely needed auto repairs?  Get some more ideas from the Du-Man on how to use your tax refund on your automobile!

"How Can You Use Your Tax Return to Help Buy A Car?"

"Fix or Replace? Tax Returns and the Broken-Down Ride"