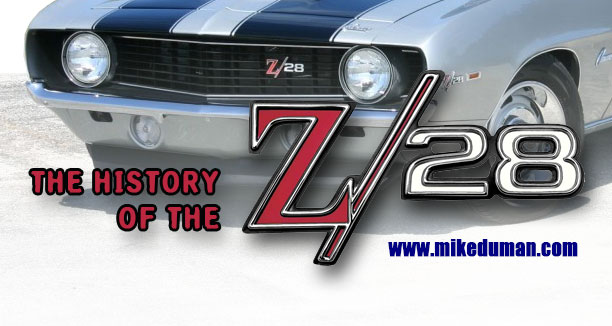 The name Z/28 will be forever linked with the Chevrolet Camaro. In reality, it was a simple three digit, alphanumeric GM sales code for a "Special Performance Package" that was introduced in December 1966.

GM wanted to challenge the Mustang on all fronts and compete with it in the Trans Am series recently created by the Sports Car Club of America (SCCA).

The SCCA had rules, and no GM engine was available that fit into that category. They were either too big, (over 305 cubic inches) or too under powered (6-cylinders) to compete.

Chevrolet wanted to offer consumers a street legal race ready performance car and to do this they just took note of what a lot of street racers were already doing. The beauty of early GM engines was the ability to swap parts to enhance their power, and Chevrolet engineer Vince Piggins did just that. He used a 327 cubic inch block and installed a crankshaft from a 283 making a "stroker" engine with a 4-inch cylinder bore that gave the new engine a cubic inch displacement of 302.4 cubic inches which slid in under the SCCA's rule of no engines over 305 cubic inches.

• See what Camaros the "Du-Man" has in stock!

Chevrolet announced their new line produced 290 horsepower, but in reality with the addition of a radical performance camshaft (that made the whole car shake at idle), fueled by a single 4-barrel carburetor and factory headers hooked up to a 3-inch exhaust, the engines were putting out closer to 360 horsepower at the rear wheels. There was an option for a dual 4 barrel carb set up that brought put out just over 400 horse power.

Oh yeah, Chevrolet was now not only in the game, but they were also now setting the trends!

From 1967-1969, Chevrolet kept improving not only the list of engine options but also the performance options available for the whole car. The 1968 and 1969 Camaro Z/28s incorporated a larger hood with forced air induction options, they were available with front disc brakes behind a 15-inch Corvette wheel package and suspension upgrades that included front coil springs and a more rigid rear multi-leaf spring set-up that proved that not only could the Z/28 dominate the "stockers" at the 1/4 mile strip, it was also a leader on the road track circuits.

With the 1970 Camaro redesign, the SCCA regs were no longer a consideration. The 2nd generation of Zs were equipped with a 350 cubic inch engine that made 360 horsepower. Also for the first time, Chevrolet was now offering the new Z/28 with a three-speed turbo automatic transmission. Sales were at an all-time high, but with increased gas prices and shortages and new federal safety and emission regulations to adhere to, the Z28 package was discontinued in 1974.

Chevrolet brought back the Z28 in mid-1977 largely in response to its sister company Pontiac's success with their Firebird line. The Trans-Ams were doing really well and always had. The revived Z was not the performance beast of old. The 350 cubic inch engine could barely boast 185 horsepower, even less if you lived in California and were subject to their strict emission laws.

Even though it wasn't the familiar muscle car, buyers could still get some respectable performance options that made the revived Z28 a fun car to drive. The addition of the T-top helped make this one of the best-selling Camaros to date.

The 3rd generation of Camaro debuted in 1982 and saw the Z28 awarded Motor Trends Car of the year. It was fitted with a 5.0 liter 4-barrel or for some added oomph, buyers could order it with the LU5 twin Cross Fire Injection system. The new Z's power train was sheltered under a fiberglass with functional air induction. Subsequent years of the gen III saw the horsepower boosted to 190 with the L69 H.O.

1993 marked the beginning of the Gen IV's.  They were equipped with an LT1 V8 that boasted 225 horsepower and by 1997 Chevy was offering a Z28 with a 310 LT1, but the sales were dropping off significantly. The attempt at a cross American/European style wasn't popular with the American consumer and GM discontinued production of the Camaro line in 2002.

After an eight year hiatus, Chevrolet reintroduced a totally new Camaro with a semi-retro style. This new era of Camaro incorporated the latest technologies and a lot of performance features from the Corvette line. In 2013, the Z28 was revived, and it WAS the beast of old.  Equipped with a 7.0 Liter V8 that pushed out 505 horsepower. Camaro lovers were ecstatic. The power combined with the modern electronics and refined suspensions made this new generation a pleasure to drive.

GM keeps improving and tweaking the body style and performance options of the Gen 6 Camaros. The Z/28 run was short-lived as GM now seems to be focusing on the ZL1 performance lines. This 6.2 liter V8 pumps out 650 factory horsepower making it one of the lead contenders for the revived American muscle car market. .....  but don't count the Z/28 out yet, the purists are pressuring GM for the next generation of the iconic Z/28!

READY, SET, SAVE with the Duman Rewards Program! Duman Rewards members get exclusive discounts at local merchant partners. Get your free printable merchant list and find out where you can start saving Today!

"How to Check a Vehicle History in 2 Steps"

"A Down and Dirty Summer Travel Checklist"